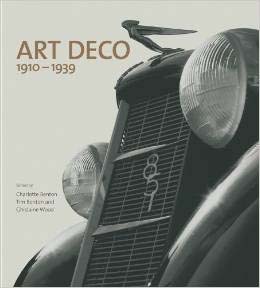 Art Deco was the style that swept across the globe during the 1920s and 1930s and created the defining look of the interwar years. Its influence was ubiquitous: it transformed the skylines of cities as diverse as New York and Shanghai; it touched the design of everything - from cinemas and Hollywood films to the packaging of cigarettes, from evening wear and accessories to luxury liners and locomotives. It was the style of hedonism, of indulgence, of mass consumption, though it originated before the First World War in the luxurious one-off masterwork or the limited edition piece. Deco was the ultimate synthesis of styles: it borrowed from European craft traditions as eagerly as it appropriated aspects of "the exotic" from the cultures of Ancient Egypt, Meso-America, the oriental East and black Africa. Its use of rare and unashamedly precious materials was a reminder of the wealth of empires, whilst its geometric imagery celebrated urban modernity and the experience of modernity worldwide. This volume brings together nearly 40 essays from leading experts in the field to discuss the phenomenon that was Art Deco. After an introductory section which looks at the definition and scope of the style, and locates it historically within the early 20th century, Part 2 explores its sources and iconography; Part 3 reviews the 1925 Exposition Internationale des Arts Decoratifs, held in Paris, which marked the high point of Deco in Europe while providing the catalyst for its wider spread and development; Part 4 traces that development both through Europe and through the various media, from architecture to fashion, that fell in thrall to its modern imperative and Part 5 traces its spread into America, India and beyond.