Home Research Books The Church of the Archangel Michael at Kavalariana

The Church of the Archangel Michael at Kavalariana 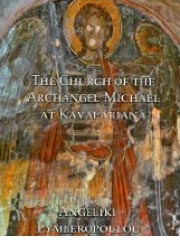 This study examines a church dedicated to the Archangel Michael, built by and for the Cretan Orthodox congregation on the south-western part of the island during the period when it was under Venetian domination (1211-1669). Its surviving inscription dates the church 1327/28. Angeliki looked at the church as a whole: examined its architecture and the iconographic programme of its wall paintings, addressed the problem of the identity of its alleged painter through stylistic and paleographic comparisons, and placed its inscription and the portraits of its fourteen donors within the historic and social context of the edifice’s era. The ‘pure’ Byzantine style displayed by the iconography of the church’s frescoes in combination with the fashionable and western in inspiration attire of the male donors, as well as the unique, for Cretan churches, inscription that praises the Venetians and their rule over the island, bears vital testimony to the fact that the fruitful co-existence and cross-cultural interaction between the Orthodox native and their Catholic conquerors had already started on the island by the first half of the fourteenth century. The study of fourteenth century Cretan art - monumental painting, its painters and the donors who sponsored it - offers fundamental knowledge for the development, evolution and climax of one of the most prolific hybrid societies and its artistic production.