Difference and Excess in Contemporary Art 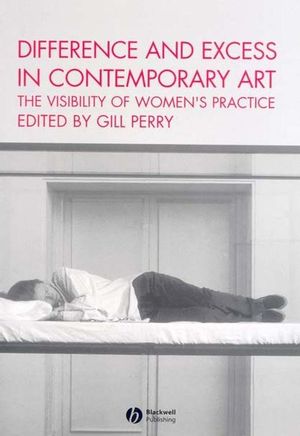 The collection was the result of a research project initiated by Gill Perry and first featured as a Special Issue of the journal Art History. It was reprinted as: Difference and Excess in Contemporary Art: The Visibility of Women’s Practice, Blackwells, 2004, (with an additional essay). The collection explores ideas of ‘visibility’ and ‘difference’ in contemporary practice, locating women’s art within a matrix of overlapping historical, cultural and post-colonial frameworks. Perry’s introduction ‘Visibility, Difference and Excess’ is an exploration of pertinent issues which draws on new research on British art and gender in the 1990s (including interviews with dealers and gallery owners), positing the idea of a shift in current thinking about the nature of ‘women’s practice’ and its status within contemporary British culture. She argues for an understanding of contemporary practice which is sensitive to the enabling alliances between art practice and theory. This essay seeks to problematise a notion of ‘difference’ in visual representation, exploring the fragmented and sometimes troubled nature of postmodern feminist practice. The introduction argues for the exploration of differing methodological approaches in the study of so-called ‘women’s practice’, and the project embraces a wide range of practices by women, some of whom do not identify themselves either as feminists or as theoretically engaged. The research project included specially commissioned interviews with artists and theorists whose work was seen to engage with issues of difference, or ‘feminine’ excess, developing the genre of the interview to provide rich material for academic debate (see especially the interviews between Tickner and Parker, Barber and Maher and Corris and Hobbs). A diverse range of media is featured, including sculpture, painting, photography, installations, video and performance. Contributors include: Lisa Tickner, Fionna Barber, Michael Corris, Richard Hobbs, Sue Malvern, David Hopkins, Jane Beckett, Marsha Meskimmon and Dorothy Rowe. Artists featured include Cornelia Parker, Rachel Whiteread, Alice Maher, Kara Walker, Gillian Wearing, Martha Rosler, Lubaina Humid, Christine Borland and moti roti.