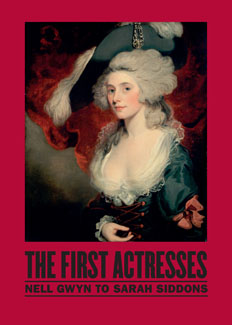 This book was written to accompany the exhibition The First Actresses: Nell Gwyn to Sarah Siddons at the National Portrait Gallery, London, 2011-12, curated by Gill Perry. The exhibition included 54 portraits and objects and involved extensive research in British archives, and some collaborative explorations with colleagues in theatre studies, music history and literature. Perry edited the book and wrote 70% (20,000 words), including three chapters and a section on biography. The book explores the role of feminine portraiture in the history and visibility of the first British actresses. It reassesses the often controversial relationship between art, gender and the theatre during the late seventeenth can d eighteenth centuries, providing a critical analysis of the ‘feminine face’ of eighteenth century celebrity culture.
The exhibition was designed to bring to public attention the important role of gender and feminine portraiture in perceptions of the theatre and its cultural influence, and in the construction of early celebrity culture. It also highlighted the remarkable symbiosis between the fine and dramatic arts during this period, and the important role of women in this synergy. In the first chapter ‘Introduction: Painting Actresses’ Lives’ Perry explores the origins of the term ‘actress’, and the complex ways in which the idea of the ‘actress’ and its cultural associations have been mediated through visual culture, and biographical and autobiographical narratives. Her chapter ‘Divas, Dancing and the Rage for Music’ draws on new research on the relationship between musical and visual culture during the period, arguing that portraiture could be seen to embody (and sometimes to seek resolutions for) many of the social and cultural contradictions implicit in public musical performances (both singing and dancing) by women. Perry argues that portraiture offered another form of ‘performance’, a visual re-staging of femininity as somewhere between art and nature. In the final chapter ‘Star Systems: Then and Now’, she explores parallels and differences with modern celebrity culture, considering some definitions and historical overviews of concepts of ‘celebrity’, often argued to have first developed in the eighteenth century with a growing commercial culture of consumption. It is argued that eighteenth century feminine portraiture provided a visual embodiment of the conflation of public and private identities and gendered myths. She argues for the continuation of a ‘distinctively feminine face’ of this culture, and a parallel and voyeuristic obsession with ‘public intimacy’.