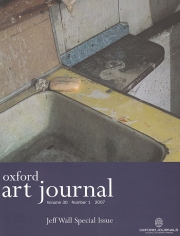 This special issue of the Oxford Art Journal is dedicated to examining the work of the artist Jeff Wall. Born in Vancouver, Canada, in 1946, Wall continues to live and work in the city. Wall commenced his career as a Conceptual artist at the end of the 1960s, producing among other works Landscape Manual in 1969–70. In the 1970s he briefly ceased making art and studied for a PhD in art history at the Courtauld Institute, London. From 1977 he began producing the works for which he is best known in his chosen medium of photography. Principally, but by no means exclusively, Wall works with large-scale colour transparencies, which are mounted in light boxes and illuminated from behind. Typically, his works consist of staged representations of everyday incidents. Sometimes, his pictures are composed digitally on a computer from a range of separate photographs; at other times, they are integral exposures made from his constructed scenarios or from objects or views that catch his attention.