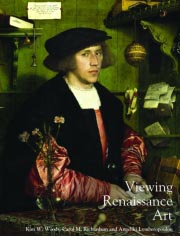 This book forms the third of a series of three volumes produced by The Open University and together entitled 'Renaissance Art Reconsidered'. The other two volumes are "Making Renaissance Art" and "Locating Renaissance Art". While the first two volumes focus on different issues surrounding the production of works of art, this book explores patterns of viewing and consuming art in the period leading up to the Reformation. "Viewing Renaissance Art" focuses on the values, priorities and motives of patrons and the purposes and functions of art works produced north and south of the Alps and in post-Byzantine Crete. It begins by considering the social range and character of Renaissance patronage and ends with a study of Hans Holbein the Younger and the reform of religious images in Basle and England. Like the other two books in the series, the volume examines Italian Renaissance art but also ventures beyond Italy to France, the Netherlands, Crete, Switzerland, Germany and England, including a range of different media, from pilgrim badges to manuscript illumination. The first chapter in this volume approaches art in terms of material culture. This and subsequent chapters introduce the concepts of self-fashioning, conspicuous consumption, magnificence, decorum and humanism. The later chapters focus on the religious context in which art was consumed: the demand for icons in Renaissance Europe, art connected with the beliefs and practices surrounding death, and the changing attitudes to religious art over the Reformation. "Viewing Renaissance Art" considers a wide range of audiences and patrons from the rulers of France to the poorest confraternities in Florence. The overriding premise is that Renaissance art was not a neutral matter of stylistic taste but an aspect of material production in which values were invested, whether religious, cultural, social or political.